We had a nice bright sunny, but cold, Winter's day in the orchard today. The focus of the work was using willow cuttings to undertake some spiling to reinforce the river bank. The willow cuttings will take root and quickly grow next and subsequent years. The root system will help to stabilize  the soft earth banks of the river as the willow grows larger. I was inspecting the river bank while standing in the river today. I could see that the recent river spate caused by the recent heavy rain is undercutting the river bank. In places there were some small collapses of soil into the river. If you look at the junction of the river and the bank in the picture below it is possible to see the dark under-cut area. 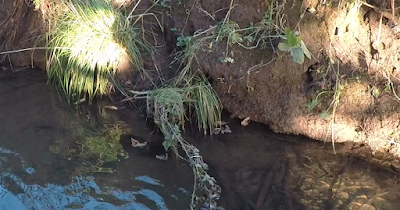 During the year part of the bank was damaged by overweight farm machinery trying to maneuver too close to the edge of the river bank. This caused a deep wheel gouge next to the river fence, damaged the fence, and also pushed some of the bank soil towards the river.  We've planted some willow spiling today which will strengthen the top of the river bank once it has grown for a few years. The deep roots will help bind the soil. 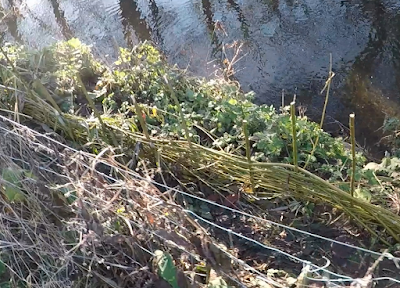 We cut the willow wands from the willow grove we'd planted a couple of years ago in the orchard. We're using a hybrid of Salix Verminalis willow which grow 2 - 3 metres in a year. Once the willow is established we'll cut and layer the branches to form a low hedge at the top of the river bank.
We pollarded the willow at roughly waist height to encourage new growth next year. It also allow the bark to thicken around the base while the tender new branches grow out of the reach of marauding sheep. 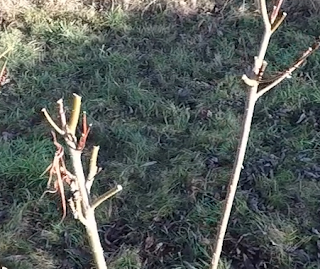 While inspecting the trees in the orchard, after completing the spiling, I found a rodent, probably a grey squirrel, had damaged the bark at the base of the Egremont Russet Apple tree. It is so annoying because the damage will stay with the tree for the rest of its life. It just goes to show the tree protectors we'd installed on most of the other trees help prevent such damage. We've already ordered some replacements to cover the trunks of all of the young trees. 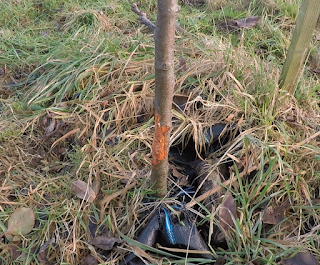