We had some work planned in the Turnditch Orchard this morning. When we checked the forecast at the start of the week the weather was looking reasonable, but the forecasts gradually got worse during the week. Now it looks like there will be solid rain until 2 pm. I guess bad weather in mid-October is not unexpected, years back when I ran sea scouts we'd have the boats lifted from the moorings around this time to avoid any storm damage from the sea.

One piece of work at the orchard which will be tested is the minor works we did to improve the water flow in the Ecclesbourne river. A bank of gravel had built up on our side of the river and the river was eroding the far side bank. The gravel bar in the river was formed mostly by debris following a partial bridge collapse some years ago. Much of this debris had been left on the river bed and over the years the wash down by floods had begun to accumulate. It's pointless to challenge a river on its course as it will win every time, but it is possible to suggest alternate routes and see if the river accepts them.

In the summer during low water levels we dug out a channel next our side of the gravel bar. It was a  straight channel about 7 metres long, 30 cm wide and 20 cm deep. The gravel and stone taken out was deposited at the base of the eroding bank to help provide some protection. So far the new channel seems to be working. It is now about 60 cm wide with a good flow of water through. The gravel and stone protection on the far bank has not been washed away, suggesting reduced erosion. The winter floods will be the true test, either the gravel channel will be filled or much of the bar will be washed away. We make no predictions. 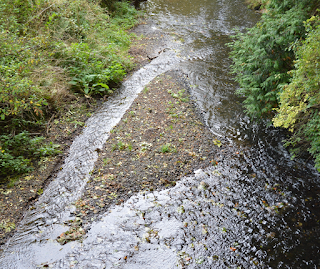 Edit 14:15 Same day. The BBC Weather forecast got it wrong. Instead of six hours of rain, we had just a couple of hours and then the weather improved.
Posted by Oaksys at 10:47

Email ThisBlogThis!Share to TwitterShare to FacebookShare to Pinterest
Labels: river